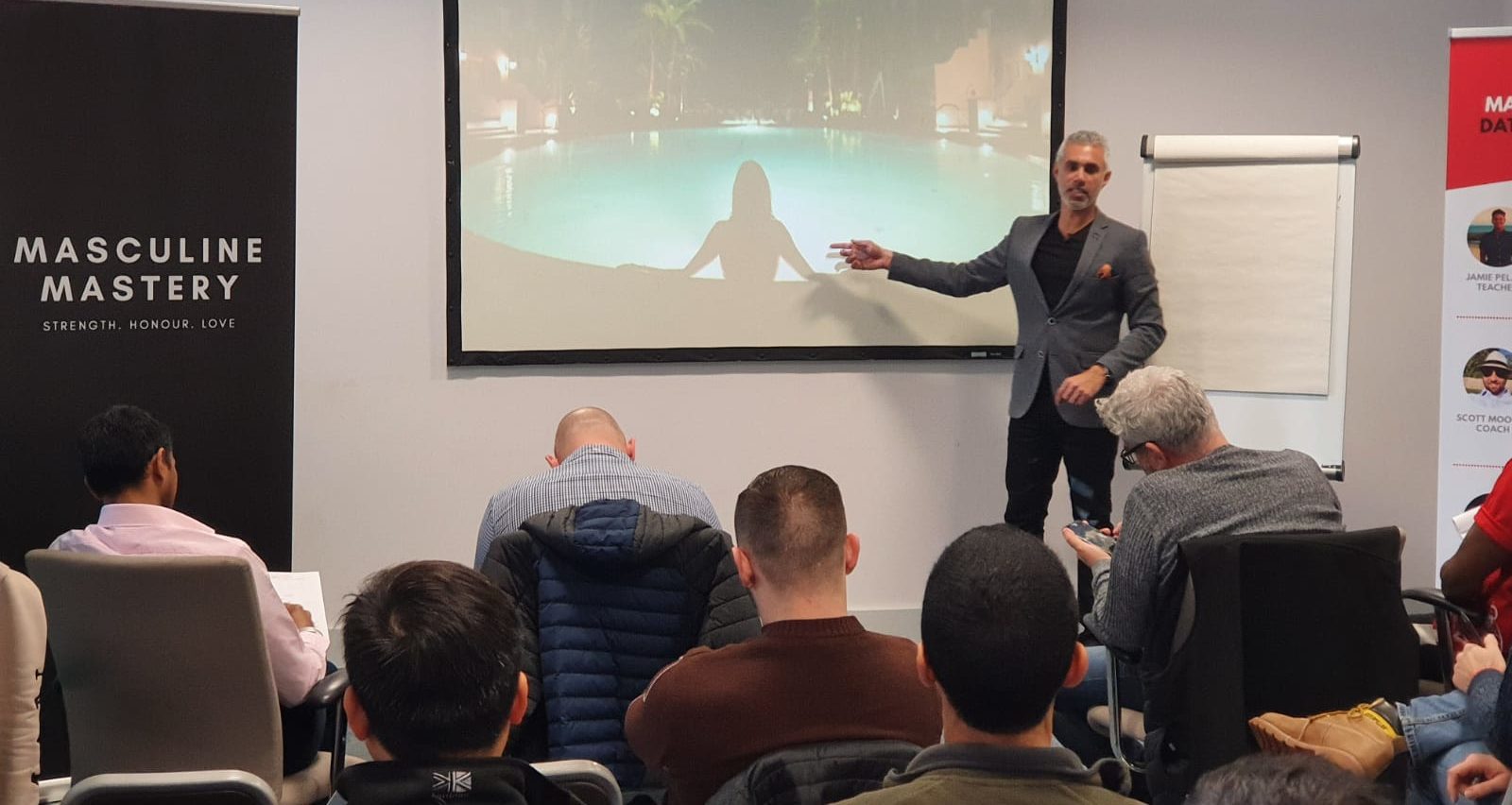 Using his revolutionary MC Blueprint, men can easily rebuild themselves to authentically captivate women and create memorable dates that lead to meaningful relationships while earning them deep respect.

Faisal has over eight years of experience training thousands of individuals from European ministers, singers, entrepreneurs to investors and companies such as Amazon, Asos and many more.

He has passionately spoken on stages throughout Europe, Asia, and Australia to help many revamp their connections, mental well-being and celebrate their differences as men and women.

As a father of two boys, Faisal loves the great outdoors as well as cycling, watersports and socialising. Travelling, psychology, poker and motoring are also among his passions.

I am on a mission to help men to become more confident, charismatic and understand what it is to be a modern masculine man when it comes to women, dating and life.

It’s easy to feel lost on ‘what it is to be a man’ and become stagnant, a people-pleaser as well as doubting ourselves. I know this all too well.

I grew up as a computer geek in west London, in a council estate. My family didn’t have a lot of money, I remember as a kid that four of us lived in a cramped one-bedroom flat for some time. I also remember that we had to wait months to get a treat like Viennetta Ice Cream.

Being a tech nerd was the perfect cover to hide many flaws. But it also fed one of the things I enjoyed most; problem-solving.

Years later I combined my love of computers and cars and ran my own internet business which later hit problems because I ran it for the love rather than as a business. However, I realised my childhood dream of test driving cars for a living which was really cool.

Emotional intelligence wasn’t something I had or thought I needed as a computer professional. So navigating through life was, well, not a battle, but felt more like war! Actually, I didn’t even know what it was, but it gave me a lot of anxiety and overthinking.

Mix this up with girls, relationships, marriage, divorce, kids, business and socialising and you can see how you have enough drama for a Netflix Original!

In the summer of 2013, I was hit with a painful awakening.

It left me devastated, I was hurting.

My marriage ended and my two young men moved out with their mum to live at the other side of the country. Some weekends I would spend up to 20 exhausting hours driving just so I could spend time with them.

This too I didn’t see coming.

At this point I caught sight of the real truth I was ignoring, the shadow; a part all humans fear to look into, the part they don’t like about themselves. I was no different. It was very confronting, shocking and painful.

I felt deeply ashamed and disgusted by it, it was so embarrassing that it made me feel numb.

I was now facing demons like insecurities, inferiority complex, neediness, controlling issues, critical tongue, anger, frustration, resentment, guilt and shame. This is so hard to write openly, but I know I must.

If I conceal it, I cannot heal it.

But I didn’t realise I had these demons, it’s not like you can see the wave when you are underwater. Maybe I just did a great job of avoiding them.

After spending years in darkness, questioning life and existence I reached a point where I felt like I had come to the end of the road in terms of existing. Without my family life no longer had the depths of meaning.

Somehow, I couldn’t take the leap and take my own life which I wanted to as it was the only way I could see. Maybe I was a coward there too.

The struggle continued and eventually I had enough. It was time to turn around how I showed up as a MAN and stop the masochism.

Then everything in my world changed.

As they say, you teach what you wish to learn the most.

Today my life has turned around, not only for me but also with men I work with.

Rising from rock bottom is no easy journey. It was a painful eye-opener for me, not what I was expecting. No quick wins here.

Once I was open to receiving the support I realised I wasn’t the only one, which was a sense of relief.

Now, I help men build a solid internal foundation and act from a place of self-worth. This permeates into genuine confidence and charisma, drives purpose, and forms meaningful connections that result in living a richer, more fulfilling life.

In other words, I kick their ass so they become powerful men, great men. Not perfect men. You don’t have to be perfect or fully healed in order to be confident, charismatic or engaging. Neither do you have to be perfect to love or be loved. You have just got to be committed to doing the work.

A man committed to bettering himself is super attractive. Don’t believe me, ask any woman. Unless she herself is plagued and blinded by her own insecurities, women will find your confidence and self-worth magnetic, endearing and refreshing.

Ready to step into Charismatic Confidence?

Schedule A Call With Faisal